Representation is inherently about seeing your identity and culture reflected, so storytellers can trip themselves up by treating groups or sub-groups as monoliths. White audiences and white gate keepers are notorious for the perpetuation of certain narratives (for instance, the trend that films led by black actors have to either be slave dramas, or white savior stories). So in this, what I see as representation may not represent all bisexuals (i.e. mainstream gay films in Hollywood vastly represent white cisgender gay men in the middle to upper class).

There are several bisexual characters in media who I adore and think are incredibly positive and well written characters. However, these characters are often wrapped up in a Hollywood Gay Trap: the coming out story. To the world, being LGBTQ+ is entangled with the idea of the closet, that one isn’t truly their identity until they “unveil” themselves to the world, as if coming to accept and love your sexuality was a debutante ball. So it stands to reason that the prevalent queer narrative in mainstream media is “how did this character come to unveil that they are gay?”

And to be fair, it makes narrative sense. It can be a good character arc: person exists, they are enlightened about their sexuality, they try and fight the forces that want to keep them down, and in the end they either live happily or they die. It’s not a bad arc, and in fact it is one that has worked well many times over: it just happens to be the only one mainstream Hollywood wants to tell.

For myself, I want more representation that normalizes just existing as a queer person. To me existing narratives caused me to believe that in order to “come out” as a bisexual man, I needed to be having romantic and sexual relationships with men AND women, and that coming out needed to be routed in trauma. 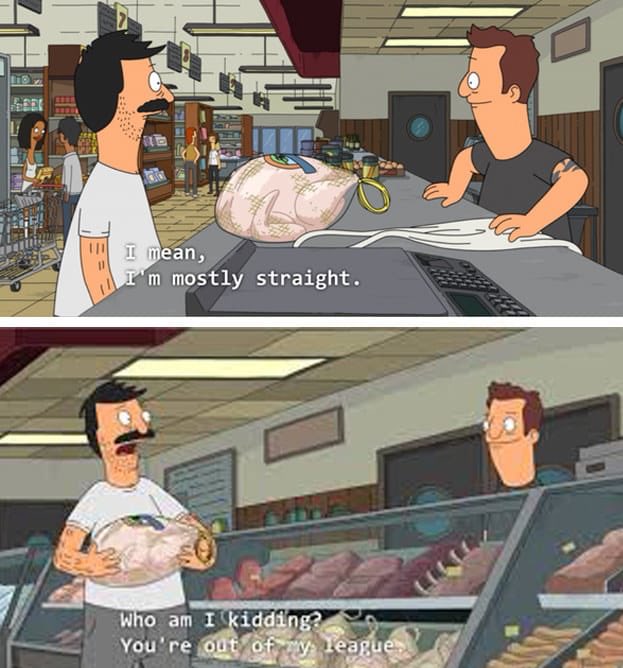 Part of this post came about because of an article on Autostraddle by Lisa A. C. Ryan. In the article Every Bob’s Burger Character Who’s Definitely Bi, With Receipts, Ryan posits that the titular Bob Belcher (who has canonically expressed romantic/physical interest in men) should have some sort of flashback to a male companion, so as to bring his queerness on-screen. Personally, I disagree, and I am comfortable with the fact that Bob may never have had a male lover, but still feels okay expressing attraction to men. Bob Belcher is a serial monogamist, and loves his wife, and I don’t need him to have slept with a man to prove he is bisexual.

I think we need wider representation in media for people who fall under the LGBTQ+ umbrella, but it needs to be okay for queer people to exist in day to day lives. Maybe if I had seen bisexual characters who’s arcs did not revolve around them dating men and women to prove their sexuality, maybe I would have been comfortable exploring my own life sooner. The characters that made me feel safe to explore were messy and unapologetic, like Pam Poovey from Archer. Pam never had to say “I am bisexual,” she just dated and slept with people of all genders without hesitation.

Representation is a thorny issue, and while I can speak to the wider problems, I can only control so much. That is why as an artist, I hope to be conscientious and tuned in to feedback. My hope is to create art that people believe reflect and represent them and their identities, and would be proud to share with others.

Buy me a coffee